> Image: Lego/YouTube This one lives on my bookshelf Climbing a Tallneck is tricky, but worth the challenge. These towering, giraffe-like..

This one lives on my bookshelf

Climbing a Tallneck is tricky, but worth the challenge. These towering, giraffe-like machines roam Horizon Zero Dawn and Forbidden West’s worlds; they’re so large you can easily spot them from afar. Getting to the top allows protagonist Aloy to use her staff’s override powers to reveal a region’s entire map — but it requires a delicate mix of grappling and careful platforming. One miscalculation and Aloy can topple off to her death, or even worse, survive the fall only to get stepped on. And don’t try to fight back; Tallnecks take no damage when you hit them. They’re basically indestructible.This is what tickles me about Lego’s new Horizon Forbidden West: Tallneck set. Now, instead of getting stomped into oblivion, you can assemble and display this enormous creature at a fraction of its size, complete with a miniature Aloy and Watcher machine, in a sort of amicable vignette. The building process is fun and streamlined, striking that balance between complexity, visual fidelity, and unexpected piece usage. With 1222 pieces, it’s no simple task — but each step of the way sparked that “aha!” moment of seeing things come together. The Tallneck Lego assembly starts with a sturdy base. A lot of the build’s strength comes from the number of SNOT pieces (heh), which stands for “studs not on top.” In human language, this means slim, L-shaped bricks are interspersed throughout a stack built horizontally, forming a solid foundation — and four little prongs for the Tallneck to snap into — that’s disguised under green-piece foliage. The upward facing studs on those L-shaped pieces connect to these green pieces, which evoke the game’s lush, overgrown dystopia. There are a handful of plants and an old traffic light, with a vine snaking around it, to complete the look. Assembling the actual Tallneck is instantly gratifying, and significantly different from the other film- and video game-themed Lego sets I’ve enjoyed. Whereas bulkier sets have hidden interior pieces that allow the model to move or do cute things — like the Super Mario 64 Question Mark Block, which holds various scenes, or BB-8’s swiveling head — the Tallneck is too lanky to hide much in the way of secrets. Instead, the fun moments of surprise came as I admired the elegant geometries that allowed the set to support the creature’s enormous, disc-sized head. I started with the torso, only figuring out what I was making after I attached pieces that looked like the receiving ends of ball and socket joints. Then I moved on to the Tallneck’s tall neck, one of the coolest bits of Lego engineering in the set. The neck looks like it’s sloping backwards, but it’s actually a series of thin, flat pieces that — when assembled flat on a tabletop — looks like an extremely shallow, very long set of stairs. Other small SNOT pieces allow for little visual details like chest plates, and the neck gets attached to the torso at a perpendicular angle, coalescing to give the creature its Brontosaurus-like look. 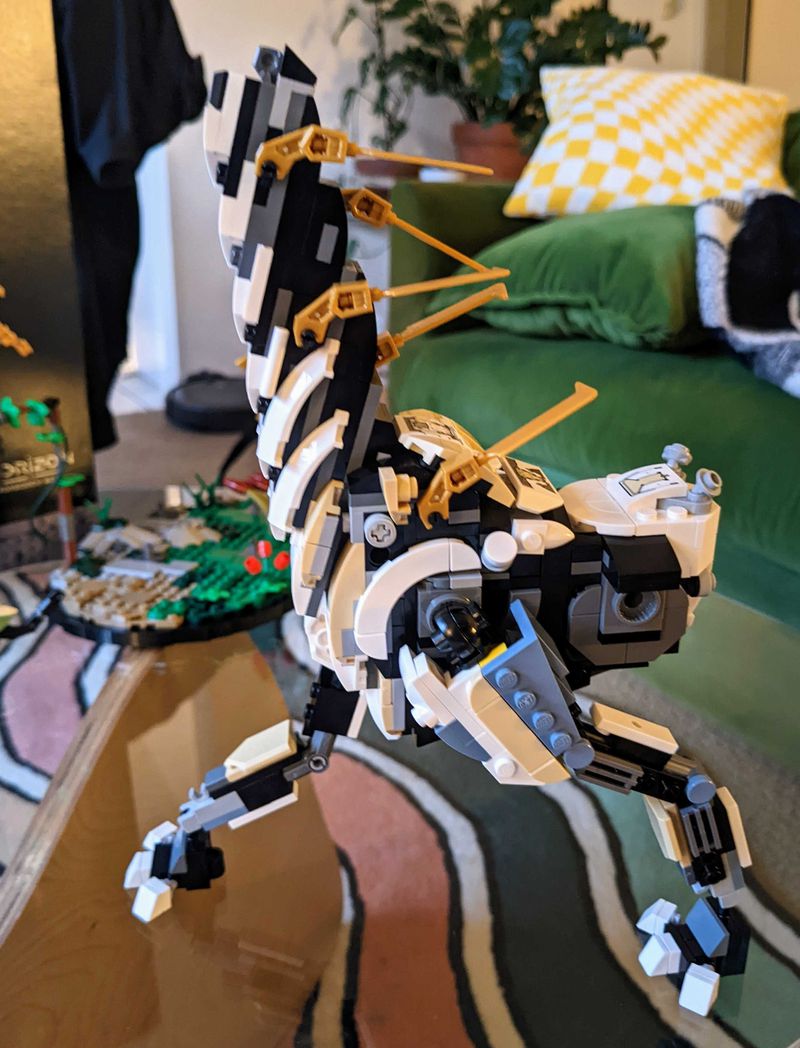 Image: Polygon via Nicole ClarkA similar principle held for the Tallneck’s legs. I assembled the back legs first. But when I stuck those first two legs in, it took me a full 20 minutes to realize I had made a (totally fixable) error that resulted in my Tallneck looking more like a lanky chicken: I had put the back legs in the front leg sockets. Luckily, I resolved this issue quickly. And after completing those final two legs, the Tallneck was born. Like many of Lego’s other sets aimed at builders over 18, this one is clearly meant to be displayed. Even if the ball-and-socket joints allow the Tallneck’s legs to be articulated in a variety of positions — and I did play with a couple of poses — the back legs are shorter than the front ones, which limits the arsenal of poses. When I snapped it into the base, however, everything was gracefully balanced, with the Tallneck’s enormous head looming, centered, above it all. Mine now gazes at me, short as ever, from the tall perch of my bookshelf.
Did you miss our previous article...
https://247gamingspot.com/reviews/review-eiyuden-chronicle-rising-ps5-attractive-action-rpg-struggles-for-rise-above